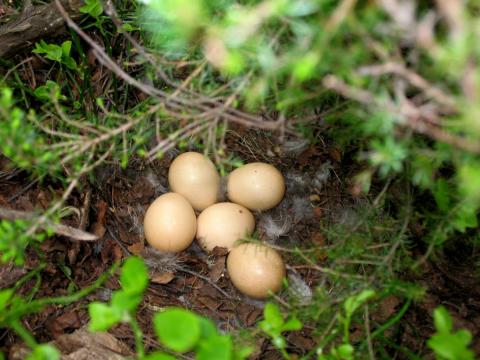 Habitat:
The Cantabrian capercaillie belongs to the bird's forest Tetraonidae family. It uses continuous forest  by fragmented and poor patches. It has a very large space requirements, so that throughout their annual cycle, you can explore hundreds of hectares, revealing itself as a species sensitive to forest fragmentation.

The uniqueness of the habitat of Cantabrian capercaillie is that it consists almost exclusively in deciduous forests. In the Cantabrian mountains, forest grouse inhabits mainly beech (Fagus sylvatica), oak (Quercus robur, Quercus petraea, Quercus pyrenaica) and birch (Betula pubescens subsp. Celtiberica). Only used occasionally Pinus sylvestris, relict or stocking. In addition, the Cantabrian capercaillie recorded seasonal variations in the use of space, using supraforestal scrubland, clear, and even stony pastures.

After the last glacial stage, the pine forests of Pinus sylvestris have reduced their coverage in the Cantabrian coast and have been displaced by the oak and beech subsequently. However, the Cantabrian capercaillie has persist adapting their winter diet consumption of outbreaks of deciduous and evergreen vegetation present in the range: holly (Ilex aquifolium), yew (Taxus baccata), ferns (Polystichum sp. Aquiliniem Pteridium between others) and heather (Calluna vulgaris, Erica spp.).

In the Cantabrian mountain range, the subspecies occurs in mountain forests between 800 and 1.600 m altitude. In general, the presence of Cantabrian capercaillie seems to depend more on forest structure than age and composition. Prefers open forests with moderate canopy cover, allowing the entry of sufficient light for the layers of shrubs and herbs to achieve proper development, especially the blueberry (Vaccinum myrtillus). The blueberries are a critical component of habitat throughout the annual cycle, especially in the breeding season.

Food:
The feeding of adult grouse (Tetrao urogallus) is basically folivores, ie essentially eat the leaves of trees and shrubs. Due to their diet, grouse have adapted features in your digestive system. In populations of central and southern Europe, pine (Pinus sylvestris) is usually the preferred winter food, although spruce (Picea abies), fir (Abies alba), larch (Larix decidua), junipers (Juniperus communis), spruce Douglas (Pseudotsuga menziesii) and various shrubs and grasses also contribute to the diet. In spring, the diet becomes more rich and varied, and take advantage of new plant species grouse available. In the fall also eat lots of berries. In the boreal forest, leaves, stems and fruits of cranberry are the main food in late summer and autumn.

In the Cantabrian mountain range there are coniferous forests, with the exception of some Scots pine (Pinus sylvestris) relict masses and afforestation carried out with the same kind or other. As a result, the Cantabrian capercaillie diet based on deciduous species, much more abundant.

The forest blueberries are a critical component of habitat throughout the annual cycle. In the first weeks of life, caterpillars and other arthropods present in the blueberries are a crucial supplement for chickens.
In general, winter and spring, trees are the most important source of food, while in summer and autumn shrubs and herbaceous plants form the basis of the diet.

During the winter, food can be based on beech, holly, birch, juniper, heather and other species available. They also eat pine needles if they can access them. In spring, the diet is supplemented with tender shoots and young leaves of beech and other species, and the green parts of bilberry, heather and various grasses.

In summer and fall, the blueberry and heather species most often consumed, along with holly, ferns and some grasses.

Reproduction:
The zeal of the grouse is collective. Between late March and early June, the males perform their mating displays that take place in specific places of the forest, called cantaderas, representing the spatial reference point around which the grouse develop most of its life cycle.

In the Cantabrian mountain range, most of singing sites are in the forest belt between 800 and 1,600 m above sea level and is now located one or two males in each singing sites, although in the past the number was much higher. Females nest on the ground in the forest or on the edge of the forest patches. The setting begins in late May or early June. Eggs are laid at intervals of one or two days until usually 6 or 8. Incubation begins with the start of last egg and lasts 24 to 26 days and is performed exclusively by the female. In the Cantabrian Mountains are usually born in late June or early weeks of July. The production rate of youngs is very low, the average productivity of them is less than 0.4, far from values ​​close to 2 populations in balance.

Many factors may have negative effects on the production of youngs, including the physiological state of females, predation on eggs and chickens and adverse weather conditions in the first weeks of life.