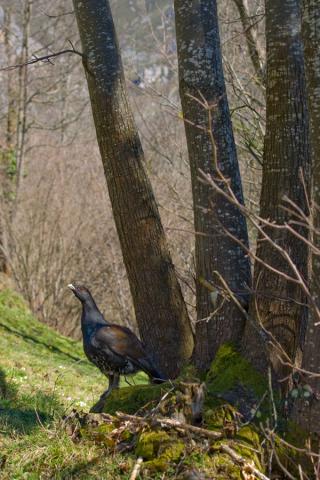 The Cantabrian subspecies (Tetrao urogallus cantabricus) located at the south-western range of the species is suffering a gradual decline and is the only globally threatened. The Spanish Catalogue of Endangered Species, regulated by Royal Decree 439/1990 of 30 March, includes the Cantabrian as "Endangered Species" (Order MAM/2231/2005, 27 June).

The Tetraonidae Specialist Group of the International Union for Conservation of Nature (IUCN) indicates that only between 250 and 300 males, their number has decreased by 25% and 50% in the last 15 years and that the habitat in the Cantabrian coast is fragmented and dispersed.
According to available data in different regions of the Cantabrian mountain range, confirming the existence of 220 singning sites occupied in 2005, a total of 720 known throughout the mountains, with an occupancy rate of 30.6%.

Galicia, the Cantabrian capercaillie occupied the region of Os Ancares, southeast of the province of Lugo, in mixed forests of birch and holly, oak and some pine reforestation. Currently, the presence of grouse in Galicia is sporadic and due more to the movements of individuals from areas bordering Leon Galicia itself a core. Since 2005 there is no evidence of occupied singing sites.

Cantabria: Recent data in 2006 recorded the presence of Cantabrian capercaillie singing sites in four places, with a minimum of 4 males divided into two areas: Camaleño and Vega de Liebana, three, and Tresviso, one.

Asturias: 398 singing sites were inventoried in 2005, with an occupancy rate below 33%. Can be considered in more than 20 years, the occupancy rate has been reduced totad singing sites . The decline has particularly affected the peripheries of the range and the central area, providing a progressive isolation between the two population centers.

Castilla y León: in this region have been recorded and inventoried 247 singing sites in 2005. 162 abandoned singing sites  (65.5%) and 85 occupied ones (34.5%). Subpopulation of Palencia is now considered extinct, contrasted with a final observation in 2001.